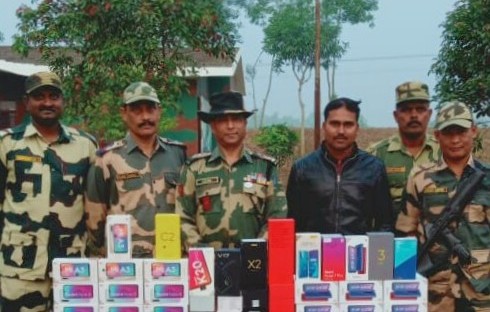 Border Security Force, while maintaining peace and tranquility along the International Boundary, has also been curbing the menace of trans-border smuggling of contraband items by conducting various operations in bordering areas.

In series of such operations, during wee hours of 24 Feb 2020, acting on specific intelligence inputs, ambush party of Border Out Post Matinagar under Sub Division Sonamura, District Sepahijala observed suspicious movement of some miscreants, approaching IBB Fence with polythene bags.

On being challenged by BSF party, the miscreants fled away from the spot towards India side taking advantage of darkness and undulating ground. The area was subjected to through search, leading to recovery of 91 Nos Mobile phones of Redmi Company worth Rs 13,37,964/-. Seized Mobile phones handed over to Custom, Sonamura.

Besides above, BSF troops deployed on Indo-Bangladesh border in Tripura have also succeeded in seizing other contrabands items having combined market value of Rs. 6, 78,706/- on the same night.

India lights up diyas, candles, mobile flash to dispel coronavirus darkness #uniteagainstcoronavirus
Distribution of food materials by Lal Bahadur club in locality. A Club forum has been formed among clubs with a motive to stand beside people who r suffering in this bad times.
Lock Down Day 7