Noise of Silence, the first Bollywood Feature Film on NRC whose entire production was designed in the backdrop of Tripura’s scenic beauty. The story of love and lost is the first of its kind in the country. People are yet to experience the agony and betrayal in a journey of a young woman’s life who is out to search for her mother. The plot of ‘Noise Of Silence’ follows two seemingly separate narratives touching one another from time to time through various incidents & interlinks. Out of these two narratives, one explores the journey of a girl; who belongs to Rohingya Muslim community of Rakhine State, Myanmar & comes to India to find her mother who got separated from her in Rohingya anarchy. The other narrative showcases the strife & conflicts faced by a man who struggles to get his & his wife’s name in the National Register of Citizens, NRC.

The film is directed by Saif Baidya and Abhijeet Chauhan as the Associate Director. It is produced by Vinay Rai, The SEE Production, Mumbai, Co-produced by Satadeep Saha, SSR CINEMAS Pvt. Ltd, Kolkata. Joysankar Bhattacharjee, Co-Founder, TOTELL, and Sahil Arya of Jar Pictures, Mumbai are the Associate Producers of “Noise of Silence”. The Executive Producer is Rahul Rawat from Mumbai. Costumes are designed by Subodh Srivastava, an experienced designer from Bollywood, Sharda Cheulkar, a senior make up artist from the Bollywood Industry worked as a makeup artist for this feature and the production design is done by Udai Prakash Singh. Sashank Chopra is the Director of Photography and casting was done by Rudra Aishwal.

The lead casts are Firdaus Hassan from Mumbai who is known for his appearances in ‘Sanju’, ‘Veer-Zaara’, ‘Lakshya’ and ‘Mukkabaaz’, Puja Jha from Mumbai who had acted in ‘A Bitter Pill’, ‘Saheb Biwi Aur Gangster 3’, ‘Ek Battey Do’, and ‘Jamtara: Sabka Number Ayega’ (TV Series), Hrishie Raj, an well known actor from Tripura, who acted in several Kokborok and bengali movies named ‘Kwmajak’, ‘Mwkhang’, ‘Bwkha’, ‘Mukhosh’, ‘Satkahon’, Ajay Kkhundal from Delhi known for appearances in ‘Mardani’ and ‘NCR: Chapter One’, Happy kalizpuria from Mumbai known for ‘Amaanat’, ‘Last Resort’ and Sayantika Nath from Tripura made a devue through this film. Prashant Yadav from Delhi, Minakshi Ghosh, Madhumita Talukdar, and Sagarika Nath Sharma, from Tripura acted in supporting roles.

The director of the film Saif Baidya said, “I am lucky enough to get my first Hindi feature film to be shot in the land of Joy, Tripura. The culture, the community, the food, the weather, the vibes were so perfect for me to shoot my biggest budget film so far. The associate producer of my film, Mr. Joysankar Bhattacharjee, a senior friend from my college suggested that I opt for this city when I was first scripting it in 2018 and didn’t know what should be the exact geography of my story. He told me about Chabimura, showed it’s amazing pictures and videos and briefed how it’s connected to Bangladesh after a certain border Loop. Later, Mr. Satadeep Saha who came onboard as a co-producer, appreciated the story and supported the team wholeheartedly. The cops and local police force helped us a lot whenever we needed any location or area to shoot. Me and my Cinematographer Shashank Chopra were very keen on choosing the location for its picturesque value and beauty within it’s frames. Shashank is very choosy with weather, natural light sources and location and as a result he was hesitant to shoot in Tripura when we discussed it in Mumbai. He was worried because in January & February the sun sets around 6pm and rises way too early around 5 am. However, the moment, me and my DOP Shashank Chopra put our steps on Tripura, had the first tea outside the airport and saw some greenery on our way to Agartala from the airport, then & there we decided that this was the best decision to shoot here. We took a huge cinema Camera with huge lenses and Tripods all around Tripura and sat on a rickshaw, went near the palace, and the crazy thing was that we were never stopped or mobbed by locals or asked questions. People were so much chilled out that they never thought of bothering us. The producer of my Film Mr. Vinay G. Rai was shocked to see how much easier it is to shoot in Tripura unlike Mumbai. It’s less chaotic, more friendly crowd and my Producer saved a lot in food as the food was so cheap and delicious. I can’t be thankful enough from the whole of my team for all the courteous and lovely gestures I received from Tripura and it’s people throughout my whole film shooting experience”.

While Satadeep Saha, Co-producer said, “I take immense pleasure to be a part of this heartfelt movie. Working with this cast and crew was amazing. It was a beautiful amalgamation of bollywood actors and actors from Tripura. It’s the first time that we have explored our beautiful state and completed the entire shooting here. It was great working with our director Saif Baidya. He was one who approached and helped me experience this journey. My sincere request to our audiences to watch the movie and make it a great success”.

Joysankar Bhattacharjee, Associate Producer added, “This film will be a gateway to the Bollywood industry for the actors and technicians from Tripura. It will be an inspiration for the entire North East region. We look forward to more such projects in future in the North-East making a great opportunity for our regional artists. We hope “NOISE OF SILENCE” will create some NOISE in the region as well as all over the country.

Firdaus Hassan said, “When I started reading the script, I could visualize the whole story. It was absolutely fantastic and realistic going through the script which was well written based on true events. Now if I talk about the shooting days, it was very nice to play my character. I went to Tripura for the first time and people there were so nice that I didn’t feel away from home at all. They are honest and sensitive and definitely very talented. Moreover, I could completely relate myself with the character of Sujoy Ghosh which I have played in the cinema. It seemed that somehow Sujoy got into me and I was really not Firdaus then! It was a realistic feeling and a great journey for me. I hope people will also feel the spark I had then to play.”

Puja Jha said, “I am working in the Bollywood industry for quite a good time. This is my first debut as a main lead for a hindi cinema and I am very happy to get this opportunity. Shooting in Tripura was an amazing and life time experience. Tripura is a very calm and cool place and the people are too nice. The local actors I have worked with are so talented. I have shooting experience in a lot of places, a lot of cities but the amount of talent that Tripura has, the confidence the actors have there is tremendous. I have seen some fresh actors who have never stood in front of the camera but they were so confident while performing. It blew my mind and I hope people will also love NOISE OF SILENCE. “

Hrishie Raj said, “Being a NE based Artist, it’s a proud moment for me and a great opportunity for Tripura to showcase our State beautifully in a commercial feature film directed by Saif Baidya. It was tremendously done by his enthusiastic team straight from Bollywood. I was very excited about this project. I am grateful to have worked with the team and with the amazing artists from Mumbai. I found the script so beautiful and exceptional. I am happy that the burning issue, i.e. NRC was brought up for a big screen”.

Ajay Kkhundal said, “When I went through the script, I could feel that it is going to be a terrific film. I decided immediately that I have to play the role. I tried my best to serve myself into it and I think people will love the character and can relate to it as well. Tripura is really a very beautiful place and it was fun to shoot there. It seemed to me that we were shooting in places like Kashmir or a city having a good greeny soul. It was a marvellous weather to shoot and the real fun had come to me when the local artists from Tripura had joined us. It was fantastic to work with them. I was surprised that some of them were acting for the first time in front of the camera but they were wonderful. It shows their dedication towards the work. Even now again I am very excited and fully ready to work in Tripura again. It was an awesome experience to work there. I hope people will love the film. “

Shashank Chopra, DOP (Director of Photography) said, ” The visuals of Tripura are so beautifully picturesque that wherever I wanted to put the camera and make a frame, it gave me an amazing shot by itself. The weather is so comforting there that from December to March time there is always orange and creamy skies. The food was amazing, the people and police were awesome. They were so compliant in participation with us and helped us in all the forms to let this film happen to what it is today and how charismatically it is shaped today. Thanks a ton to the people of Tripura”. 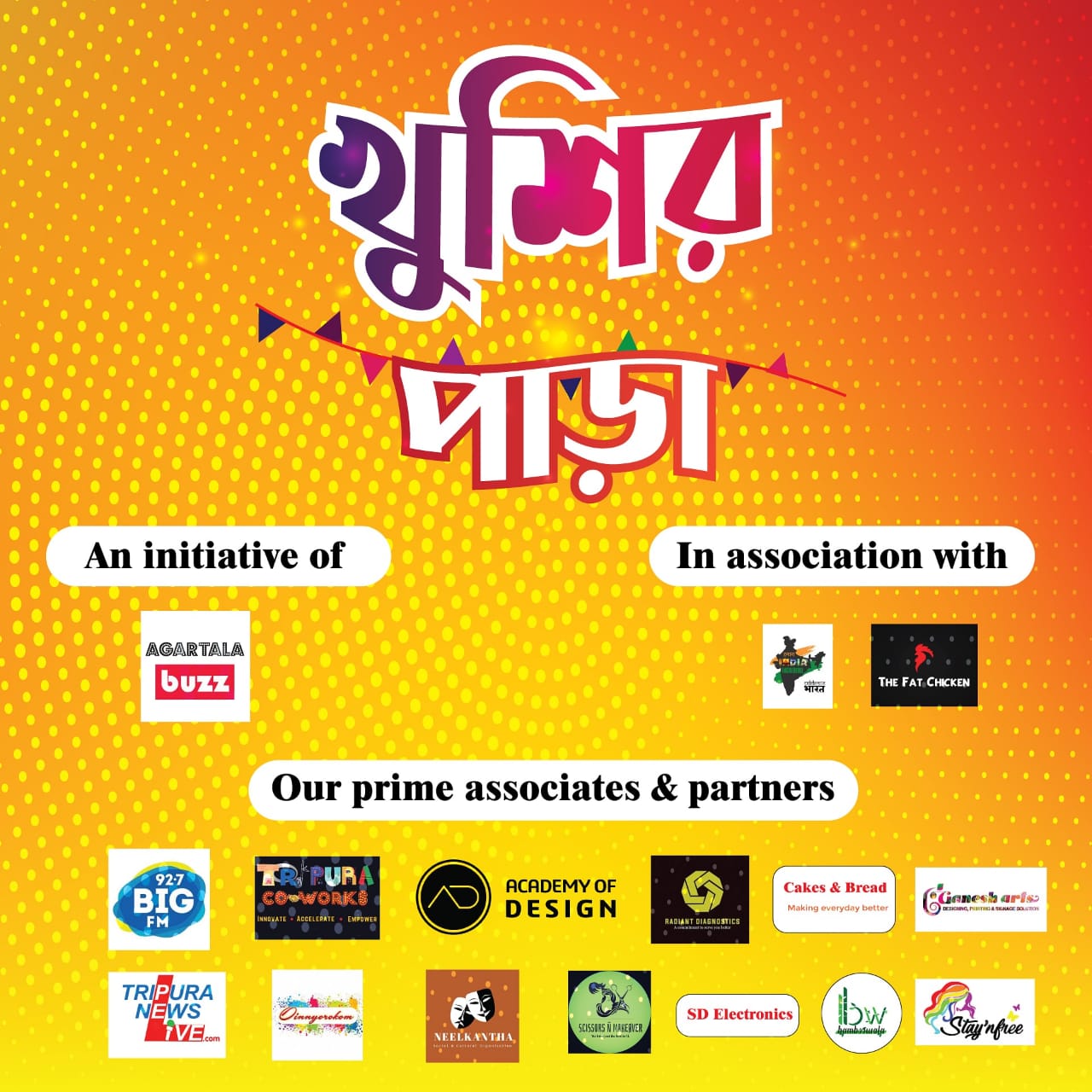